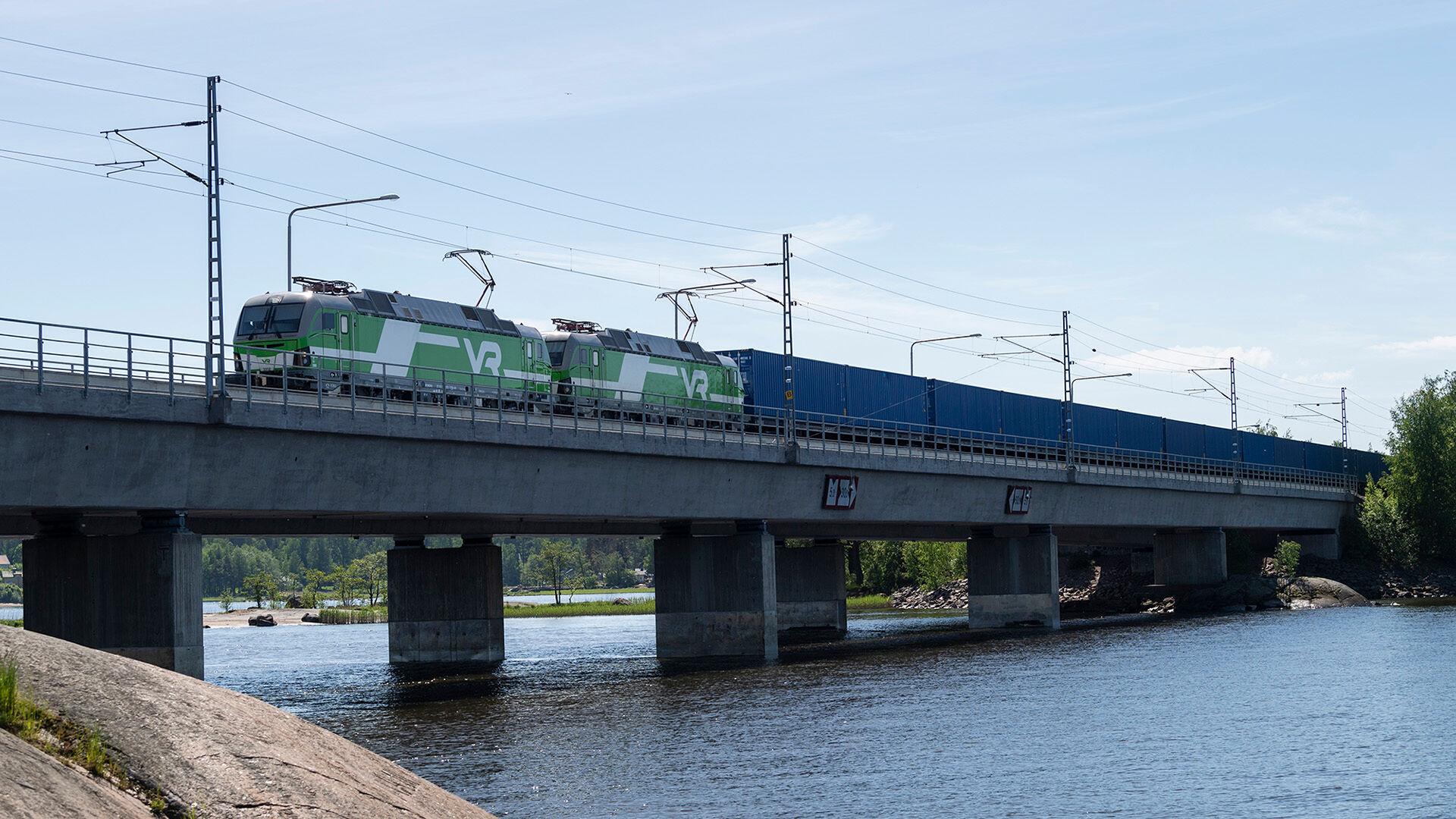 Container train on the way to Japan from Mussalo Harbour in Kotka.

Fast and reliable container trains are becoming a standardised transport option for traffic between Asia and the Nordic countries. There are already more container trains running between Finland and China than ever before.

Nurminen Logistics’ terminal in Vuosaari Harbour receives three container trains every week, and the trains have departed from different parts around China. The terminal also loads trains headed to China. Some of these are so-called customer trains that carry only one customer's products.

“With multiple routes and more frequent train departures, direct container trains have become a very viable alternative for customers and partners. There are now totally new opportunities for general cargo transport, for example. Customer feedback has been positive, and our customer base continues to grow,” says Marjut Linnajärvi, VP Sales of Nurminen Logistics.

Nurminen Logistics started container traffic between Vuosaari Harbour and China’s Hefei in November 2018. During 2019, only one container train travelled in both directions once every two weeks.

Now, 12 trains arrive from China to Vuosaari every month and 3–5 trains leave for China each month, depending on the volume.

In addition to Nurminen, China’s and Asia’s container train traffic includes other operators who are partnered with VR Transpoint. VR Transpoint also sells services itself with full customer trains as the product.

The sudden growth in traffic required quick responses from both Nurminen and VR Transpoint, which manages the traction service for container trains on Finland’s side.

“No one can handle the entire process on their own. We must closely and actively discuss things with our partners, because the best operating models are found in cooperation.

"We get good feedback from customers on transfer speed"

Now, container train transport and container processing have been refined and work smoothly.

“We have had very good contacts at VR Transpoint. When an import train arrives in Vainikkala, we can be sure that it will be in Vuosaari for unloading the next morning. We can trust the timetables, and we also get good feedback from customers on transfer speed,” says Linnajärvi.

Container trains arriving from Russia via Vainikkala are driven to Vuosaari Harbour, which is conveniently located next to Nurminen’s terminal. Export-direction trains are loaded on the same track. The track is also long enough for processing a larger number of wagons.

Together with Nurminen, VR Transpoint's transport production has created precise operating models for Vuosaari's traffic. At Vainikkala’s border station, trains can be quickly taken across the border, and traffic from Vainikkala to Vuosaari has been made faster.

“There was a lot to think about at first, because there has previously not been any Eastern traffic in Vuosaari. The harbour is very compact, and we must operate in a way that does not cause congestion in the harbour’s traffic. Trains are unloaded in Vuosaari in two parts. We review the situation in Vuosaari and train timetables every week, if not every day,” says Lea Viinamäki, Sales Manager for Eastern traffic at VR Transpoint.

A fast and reliable option

The strongest assets of direct container trains are speed, reliability, and sustainability.

In 2020, the average transport time between Vuosaari and China’s destinations was approximately 14 days. The fastest journey between Finland and China was completed in 11 days.

"Thanks to the fast transport time, it is possible to bring to Finland seasonal products"

A wide range of industrial products are imported to Finland from China. For many customers, high-speed trains are an alternative to air freight. Export-direction containers carry products from the forest and steel industry and the machine shop, for example.

“Many export customers want to maintain a dense delivery cycle, avoid additional storage and ensure that deliveries stay on schedule. Some buy allocation for each week for two months in advance, ensuring weekly transports. Thanks to the fast transport time, it is possible to bring to Finland also seasonal products which would not arrive fast enough  by sea,” says Linnajärvi.

Nurminen Logistics started to prepare the transports to China well before traffic started running. The foundation was decades of experience in Russia’s railway transports.

“When we started traffic, we rented containers through a Chinese partner. Along the way, we also looked at other container manufacturers and found a good supplier for new containers,” Linnajärvi explains.

“When demand increased, we had already added hundreds of containers to our rotation. We had enough containers and were able to expand our operations.

Although the transport volumes on the new routes are predicted as accurately as possible, only some routes will remain in long-term use.

“Some of the routes have worked very well, others have been taken out of use quickly. We have been living in very exceptional times. The current situation will continue until the end of the year, at least, perhaps until next spring. It will surely take years for routes to be standardised.

To the Far East via Vladivostok

In addition to transports to China, Nurminen's services include container trains that travel along the Trans-Siberian Railway to the port of Nakhodka in Vladivostok and from there by ship to Japan, South Korea, Singapore and Vietnam.

Until now, container trains have departed for the Trans-Siberian Railway from Vuosaari. At the beginning of June, Nurminen also started regular container train traffic from Mussalo Harbour in Kotka via Vladivostok to Yokohama and Shimizhu in Japan, and to Singapore and Busan in South Korea.

In Mussalo, Nurminen has an indoor terminal track, a flow-through terminal and a chemical hall, for example. During August, three trains left from Mussalo towards the Far East.

The operation of the Trans-Siberian route has been slowed down by the increased traffic and the congestion of customs in the port of Nakhodka.

“Customs clearance is done in the order in which the containers arrive at the port. The current transport time is about 35 days in import traffic and 25–40 days in export traffic. This does not correspond to what transport times should be in train transport, but works well as an alternative to sea transport,” says Linnajärvi.

Nurminen Logistics’ latest new frontier opened in June, when it was the first European operator to transport a container train to India. The route used was the International North-South Transport Corridor that goes through Russia, Azerbaijan and Iran.

The future of container train transport in China and the Far East looks promising overall.

“We are also interested in the growth of container traffic, as it brings a completely new flow to railways. We have gained valuable experience in operating trains. Transports have been seen as reliable, people have become interested and we have had good experiences regarding the route’s operation. I hope that we will soon be able to try food transport as well,” Viinamäki says.

“Many companies have tried the route and started using it. The railways can be an important method of transporting goods, especially for products that require precise delivery times.

Pursiainen believes that customers from Sweden and Norway will also start using the route.

“This way, we could achieve a better balance for traffic. Increasing the volume on railways will also increase the efficiency of transports.

Marjut Linnajärvi notes that the railway route to Europe is also important for China.

“All our destinations are also some of China's largest freight stations that have the capacity to process several trains leaving for Europe each day. China has also invested in the operation of border stations. The capacity of transshipment has been constantly increasing.

Environmental reasons also favour rail traffic. The carbon footprint of a container train per each tonne transported is significantly lower than that of sea freight.

The professional requirements for drivers are increased in Russia