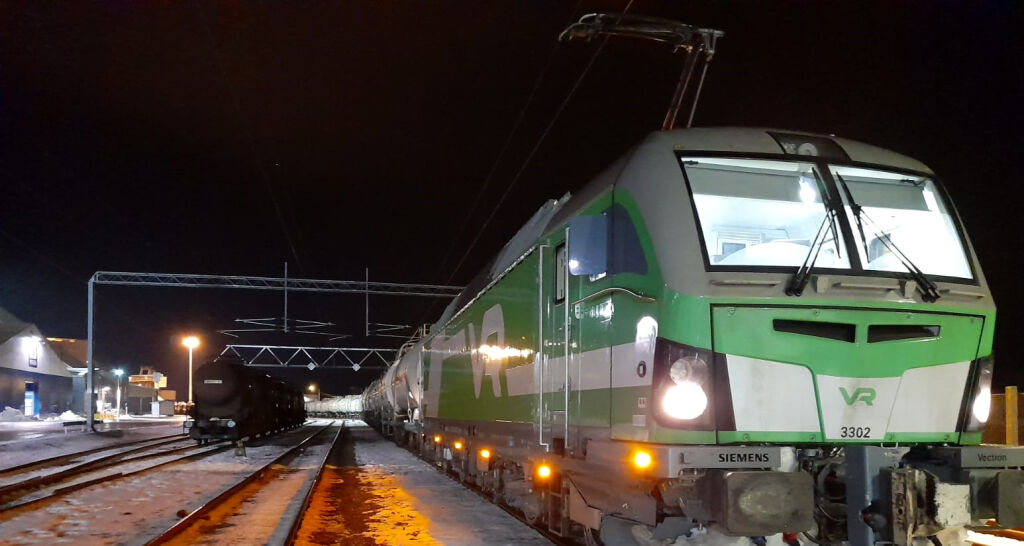 VR Transpoint’s electrically driven freight traffic to the city of Uusikaupunki began today, 14 February. The electrification of the railway network will improve the efficiency of industrial railway transport and also reduce the carbon footprint of society.

14 February marked a historic day for the freight traffic between Turku and Uusikaupunki, as electrically driven freight traffic was started on the railway section. The electrified line between Turku and Uusikaupunki has received an implementation permit, and VR Transpoint now mainly operates electronically driven transport to the plant of Yara, a company specialised in fertilisers.

“Expanding the electrified railway network is important to us. With electrification, we can increase the share of zero-emission electrically driven traffic, which already accounts for about 80 per cent of all railway freight traffic,” says Martti Koskinen, Senior Vice President, VR Transpoint.

Increasing electrically driven traffic improves the energy efficiency of railway logistics as well as the overall efficiency of the logistics chain, as consignments can be carried from the beginning to the end of the journey using the same locomotive – in the future, it will no longer be required to change the locomotive in Turku from an electrically driven to a diesel one. The emissions and impacts of noise caused by rail transport will also decrease.

“The operating model reduces the carbon dioxide emissions of all Yara’s railway transport by more than 20 per cent, as the entire railway section between Turku and Uusikaupunki can now be operated entirely by electric tractive stock. This is another step towards carbon-neutral transport,” Koskinen says.

In Finland, Yara has reduced the greenhouse gas emissions of fertiliser production by 90 per cent in just over 10 years by investing in catalyst technology. Thanks to the technology, Yara’s fertilisers have a small carbon footprint.

“A significant part of Yara’s raw material transports to Uusikaupunki are carried out by rail. Thanks to the electrification of the railway section, we can now carry out the railway transport of Yara’s Uusikaupunki plant in an almost emission-free manner. This also supports Yara’s other climate-related operations,” says Teija Kankaanpää, Plant Manager at Yara’s plant in Uusikaupunki, Finland.

The cooperation between VR Transpoint and Yara goes back a long way. The two have been working closely for many years to develop transport, and both train fleet solutions and emission strategies are being planned in cooperation. The companies also cooperate closely in matters related to safety.

The objective of VR Transpoint is to increase the share of trains running on electricity to 85 per cent over the next 5–10 years. Reaching that goal requires the electrification of the railway network to be continued. Electrically driven traffic enables bigger loads with fewer trains, while energy consumption and emissions are also further reduced.

“The more goods are transported by rail, the more effectively we are able to reduce the total emissions from traffic. Rail transport is the most energy-efficient mode of transport with the lowest emissions, which is why it plays a crucial role in curbing climate change. By making rail transport more popular, we can reduce the emissions of our customers and Finland as a whole,” Koskinen says.